translated into Portuguese by José Sá 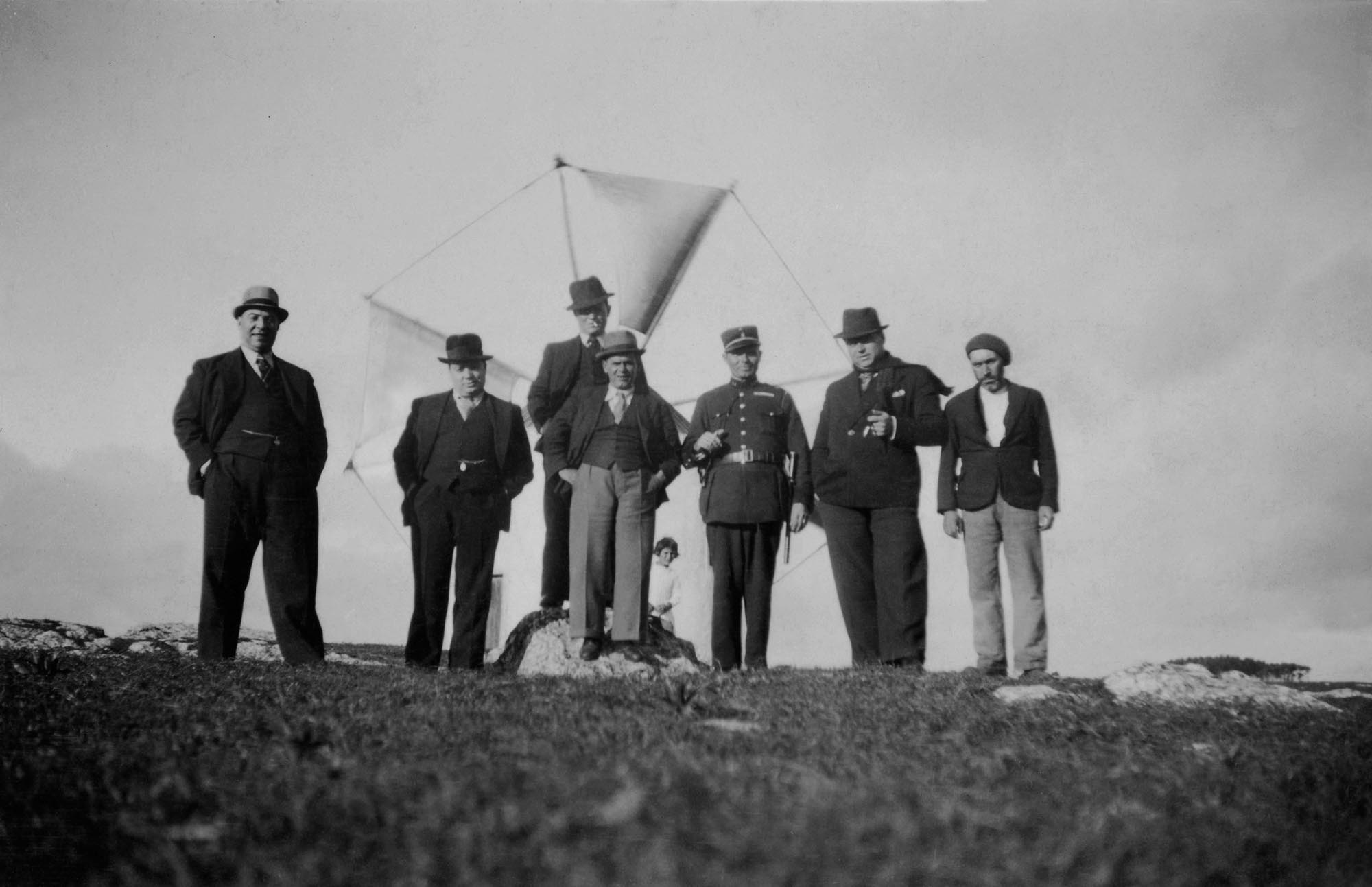 Álvaro resented being sent to the darkroom. It was the sort of errand you gave an office boy, not a reporter. He went without making a fuss, but knew he was being undermined.

He knocked on the door and went in. The room was bathed in red and it took a moment or two for his eyes to adjust. The space smelled pleasantly of chemicals and was surprisingly cool. But there didn’t appear to be anyone in there.

A line of pegged photographs hung like bunting across the middle of the room.

‘Hey! What are you doing in here?

Álvaro turned to see the photographer’s silhouette in the doorway.

‘Sorry, I did knock,’ said Álvaro. ‘The editor sent me for the regatta photos.’

The photographer looked Álvaro up and down, his face angry or suspicious. ‘Wait outside,’ he said.

Álvaro went out into the corridor and lit a cigarette. He’d known the photographer for years, six no less, for that was how long Álvaro had been at the paper and the photographer had already been there then. The man had always been friendly in the past.

He came out and handed Álvaro an envelope. ‘Here you are,’ he said. He’d opened the door only narrowly and had shut it quickly behind him.

‘Sorry, I hope I didn’t spoil anything,’ said Álvaro. ‘Letting light in, I mean.’

The photographer looked confused. ‘Oh, no,’ he said, shaking his head. ‘You didn’t look at anything, did you?’

The photographer nodded, evidently satisfied. ‘Well wait outside next time.’ He went back into his room and Álvaro headed off down the corridor.

Álvaro had looked at the photos, of course. One in particular had caught his eye: seven men standing in front of a windmill. He’d recognised them all immediately, anyone in town would have. There was Mário dos Santos Campos, the factory owner; Leovigildo Duque, the construction boss; Aníbal Mendes, the union buster turned PVDE agent; Luís Alberto Machado, the mayor; José Carneiro, the chief of police; Dom Clótario de Lima, the landowner; and António Vaz, the smuggler. They made a most unlikely group. Álvaro was sure they’d never been seen together in public before.

He walked to the eastern edge of town and over to the huts where the gypsies lived. He realised his efforts to dress down had been in vain: rolling up his shirt sleeves and going without a tie did not make him blend in. He smiled at people, but his greeting was not often returned.

There’d been an eighth figure in the photo. Hiding in the background, out of sight of the seven men: a little girl. Álvaro had recognised her too. He’d seen her outside the market with the gypsy women who sold bay leaves.

There were one or two children playing in front of the huts, but they were a lot younger than the girl. He went down to look on the beach instead, but blinded himself by staring straight at the sun’s reflection on the water. He closed his eyes to wait for the blotches to clear. He could smell the sea and he heard children’s voices. He opened his eyes and saw a group of five or six children building something in the sand. One of them was his girl. When she got up and went down to the water’s edge, he followed.

She looked up at him, squinting in the sun, then went back to whatever she was doing – washing a shell, by the looks of it.

‘There’s no need to be afraid, I’m from the newspaper. I just want to ask you a question, that’s all. Here, I brought some figs.’

Álvaro had bought dried figs on the way for this very purpose. He held out the bag. She hesitated, then took them and stuffed two in her mouth at once. They looked tasty and Álvaro regretted not having taken one for himself.

‘I’m looking for a windmill,’ he said, ‘the one where you sometimes go to play and where some men go too.’

The girl’s eyes remained focused on the figs.

‘Do you know the windmill I mean?’ he ventured. But she said nothing, just went on chewing.

‘You know António Vaz’ he said, a little more insistent now, ‘the… fisherman?’

‘Well he was there, at this windmill, with some other men. And you were there too. Do you know the windmill I mean?’

‘Could you take me there?’

She didn’t respond. She put more figs in her mouth, three this time, stalks and all.

‘It would be worth another bag of figs,’ he said. ‘Maybe even an ice cream.’

Six weeks earlier, Álvaro had been visited by Nazaré, a girl he’d been at school with. Her father, Eurico, had been out fishing one night and seen something she thought might be important. Coming back to shore, he’d noticed another boat moving near the cliffs. He’d panicked at first, for he’d been fishing in an estuary that belonged to Dom Clótario and he’d been told off for poaching before. But it was a cloudy night and the moon shone in such a way that the other boat was in the light, while he was in shadow. He relaxed, until he realised what he was seeing. There were three men in the boat: at the bow sat António Vaz, the smuggler, rowing; at the stern sat Aníbal Mendes, the PVDE agent, smoking; and in between them sat Jaime Dias, the anarchist, who was supposed to be in Tarrafal.

Álvaro had thanked Nazaré and promised to look into it. Journalists needed to be careful with such things, but he thought there was no harm in asking to see the list of prisoners shipped to the penal colony. He’d duly submitted a request, but his editor had blocked it: they weren’t about to risk upsetting the PVDE over something an old man thought he’d seen in the dark.

This was only to be expected, but it had annoyed Álvaro all the same, because the editor knew as well as he did that Jaime was no anarchist. He was the childhood sweetheart of Natalia, the prettiest girl in town, who Leovigildo Duque, the construction boss, a man thirty-five years her senior, had set his sights on marrying. Leovigildo had denounced Jaime as an anarchist and the boy had been arrested. When Natalia had continued to spurn Leovigildo’s advances, Jaime had been sent to Tarrafal. Or so it was said.

Álvaro had resigned himself to letting the matter go when Nazaré came to see him for a second time. Eurico had been beaten black and blue. He wouldn’t say what had happened, but Nazaré had gone to see José Carneiro, the chief of police, and he’d told her that Eurico was an anarcho-syndicalist militant who’d got what was coming to him.

This was outrageous nonsense. Jaime was no anarchist, but he had at least been in the union and protested when they’d been abolished. Eurico had never been in a union and wasn’t militant about anything. Álvaro had gone back to see his editor, and yet again he’d kiboshed the story: a suspected subversive had been beaten up; it could hardly be considered news.

Alvaro and the girl struck out heading inland across a field behind the gypsy settlement. A brown dog followed them for a while, but lost interest when they doubled back towards the sea. They then walked parallel to the coastline, eventually converging with it only to negotiate a set of crags. The rock appeared bleached white against the blue sky. Álvaro stopped to mop his brow and let the girl go on ahead. She kept up a fierce pace.

Álvaro tried to make conversation at first, asking her about the scene in the photo, then about school, brothers and sisters and so on. She’d either give one word answers or wouldn’t reply at all. She seemed to find him puzzling, this man who brought her figs. But she knew where they were going, and that was the main thing.

Álvaro wasn’t sure what he hoped to find at the windmill. Signs of a hideout, perhaps. Eurico had refused to speak of his ordeal, but Álvaro had heard other accounts of beatings. People talked of being placed inside a circle, of being pushed and shoved, then kicked and punched as the circle closed in. The inside of a windmill would make a natural circle.

That would actually be a bit much. Mostly he just wanted to be able to tell Nazaré he’d tried. He didn’t want her to think he was too afraid or didn’t care.

The footpath came out onto a beach, one that Álvaro didn’t recognise. They continued along the sand and rounded a cliff. It occurred to him that they wouldn’t have been able to pass if the tide had been in. Was that why the girl had suggested today instead of yesterday? Her gypsy wisdom, perhaps.

Beyond the promontory they joined another path and began to climb. Steps had been cut into the hill at the steeper parts. The sun beat down on Álvaro’s head and his throat was dry. He was beginning to wish they’d met later in the day. Then suddenly he saw it. The path emerged abruptly onto a brow and there it was, standing proud on the headland: the windmill from the photo.

He was surprised and excited that they’d found it, but felt stirrings of apprehension, too. If it really was a den, what was he doing there? He was cross with himself for not having used the journey to think up a good excuse.

But the girl seemed unconcerned. She forged on ahead, so Álvaro followed.

It was dark inside the windmill and he couldn’t see a thing at first. Then his eyes adjusted and he realised it wasn’t that dark after all, it was more just a matter of contrast after the brightness of outside. His vision came into focus. They were not alone.

‘Thanks, Madalena,’ said Luís Alberto Machado, the mayor, addressing the gypsy girl. She walked over to Mário dos Santos Campos, the factory owner, who placed an escudo in her hand. She put the coin in her pocket and left.

Álvaro looked around the room. Besides the mayor and the factory owner, there was Leovigildo Duque, the construction boss; Aníbal Mendes, the PVDE agent; José Carneiro, the chief of police; Dom Clótario, the landowner; and António Vaz, the smuggler.

The photo of the men, the girl and the windmill flashed before him. Then another man stepped out of the shadows: his editor.

‘I warned you, Alvaro, about what cannot be considered news.’